BlogWho will win in San Diego on Sunday?

Who will win on Sunday?

Before we preview Sunday of the Farmers, just wanted to pass on some sad news.  Just found out that golf legend Billy Casper died this evening in Springville, Utah.  He died peacefully from a heart attack with his wife of 62 years, Shirley at his side.  Billy was 83.

Casper grew up and learned to play golf in San Diego, California.  He won 51 times on the PGA Tour, which ranks seventh on the all-time list.  Between 1964 through 1970 his 27 victories topped every player in the world. He totaled two more wins than Jack Nicklaus, 13 more than Arnold Palmer and 14 more than Gary Player in that time period.

Casper was a family man, he and Shirley had 11 children probably the most of any player on the PGA Tour.  He could have been better and achieved more in golf, but he made sure to spend more time with the family than playing golf.  Of his 51 wins, he won two U.S. Open’s and a Masters.

I knew Billy via his son Bob.  I was honored to play with Billy and Bob at Carnoustie Golf Club right before the 2005 British Open.  He was so easy to play with, and I had an enjoyable day.  Billy was 73 years old and wasn’t use to walking 18 holes but he really was enjoying the day.  Just getting him out on a course that he almost won a British Open on and seeing the joy in his eyes of reliving that week back in 1968 was special.  Casper led that Open after the second and third rounds, but shot a final round 78 to fall three shots back of Gary Player.  In a bit of irony, Casper told us about the final round and how he hung tight until he hooked his ball out of bounds at 14.   Sure enough 37 years after that disastrous shot that ended his quest to win the British Open, Casper got on that 14th tee and again hooked his ball out of bounds just like in 1968. Billy didn’t miss a beat and with a big belly laugh said “with all of the year’s of experience, I still can’t play this hole,” giving us something to laugh about.  Yes it was a joyous day made special by a special person.

For the last decade, I loved having lunch with him at the Masters that was his favorite week of the year.  Unfortunately, he got sick last year  and we couldn’t rekindle what for me was special time.  In talking with Bob frequently on Billy’s problems, which first came up when he passed out at Augusta last April, the last ten months has been a real struggle with him in rehabilitation to help a heart problem.  Compounding things he got a bout of pneumonia over Thanksgiving which really slowed him down.  He worked hard at rehab with the thought of returning to this years Masters; something I was eagerly awaiting.  I will miss not having lunch with him at this year and future Masters.

So condolences to Bob, Shirley, and the Casper clad for the lost of such a great man. 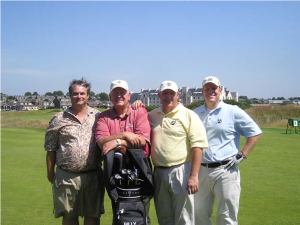 A great day at Carnoustie with a great man, I will miss Billy Casper

Who will win at Torrey Pines:

With the way the scoring is going at Torrey Pines you would have thought that this was the U.S. Open.  Saturday saw only six rounds in the 60s, with 68 being the lowest.  J.B. Holmes and Harris English are leading at 9 under par, but with tough conditions you can see that Sunday will be a shootout.  One shot back is Jimmy Walker, Lucas Glover, Chad Campbell, Nick Watney and Spencer Levin.  Just two back are Jason Day, Bill Haas, Jhonattan Vegas and Andres Gonzales.  Quite a star studded cast of 12 players.  If that isn’t close enough there are found players including defending champion Scott Stallings, Ian Poulter, John Peterson, and Marc Leishman.

Normally you would look at those within five of the two leaders, there are 30 players within five but frankly with conditions so tough and with very little chance of anyone shooting 65 or lower, it’s an impossibility for those at 4 under.

So what is it going to take to win on Sunday?  Just look at J.B. Holmes round, he shot 68 by making birdie on three of the four par 5s and then birdies on three of the easier par 4s.  I have to think that this round is what players will be looking for on Sunday, dominate the four par 5s and just make pars on the rest of the holes.  So the question on Holmes, can he repeat his third round 68 and again dominate the par 5s.  I think he can, and he has to be a very strong choice to win on Sunday.

What about co-leader Harris English?  As the second round leader he looked good after making a birdie at one on Saturday.  After that it was a struggle, he made double at 4 and only birdied one other hole 13 and made a bogey at 16.  So in a way he wasted a good opportunity to distance himself from the field.

One thing about the two leaders scores on Saturday, yes Holmes shot 68 but his day and English weren’t statistically that great.  Holmes hit only 11 fairways, but had a good day getting it up and down 4 out of 4 times from the sand and only took 24 putts.  English hit 13 greens but wasn’t as good taking 30 putts.  So for these two to win they will have to step it up a notch on Sunday to win.

So is there that one person that looks special for Sunday?  Past experience is a must, as we mentioned in our preview only twice in the history of this tournament has a player with no wins, gone to victory at the Farmers and the last time that happened was Jay Don Blake in 1991.  So this has to eliminate Spencer Levin, Alex Prugh, and Andres Gonzaales.  In looking at a player that has done well in a major, Lucas Glover is the only major winner within 3 of the lead.  But he hasn’t been in the top-10 since the Zurich Classic in April of 2013 so you have to wonder if he can do it.  One top of that just three weeks ago he suffered an injury to his left thumb while playing with his daughter.  He almost scratched himself from this week, Phoenix and the Humana.  He says that the injury has forced him to focus more on his putting, a part of his game that hasn’t been very good.  You remember the old saying, be weary of the injured that could be the case with Glover.

So who do I favor?  I tend to favor those that have won this season (Jimmy walker and Bill Haas) along with Nick Watney a past Farmers Champion.   By personal favorite is Jason Day who has a great track record at Torrey Pines and has done well.  He got very lucky in his round of 71 on Saturday with an eagle on 17 by holing out a 143 yard 9 iron.  He turned things around with his 33 on the back nine and I like the momentum he takes into the final round.

So are you sure that nobody from the back of the pack can make a run?  Yes, the course is too tough.  Now Johnny Miller proved everyone wrong with his 63 at the U.S. Open in 1973, still I can’t see someone shooting better than 67 on Sunday.  So with so many bunched up, someone within two will be there to win it.  I will tell you something that I can see happening, someone backing into a victory.  Someone making eagle at 18 late like in the fifth or sixth to last group and holding on in the clubhouse.  This tournament will be won on the final four holes on Sunday, and I would say that the odds are 50/50 on a playoff.  So flip a coin, it will be blind luck to really pick a winner for Sunday.

Below is a list of the top-31 players on the leader board going to 5 under which is 5 shots back of J.B. Holmes and Harris English

Of the top-31 on the leaderboard, who is playing the best: for the Farmers Insurance Open

Of the top-31 on the leaderboard, who isn’t playing well: for the Farmers Insurance Open

Look for the long hitters who are hitting it straight to prevail.  I really think that someone that birdies all four par 5s and pars the remaining 14 holes will be the champion.  Making birdies on the par 4s and 3s is a tough proposition.  I also like those that seem to be getting better, Holmes fits the bill.  Also like those that have played well recently, Walker and Haas stands out because of their wins in January.  Also have to like past champion Nick Watney who hasn’t been playing well for a while.  For Watney, Glover, and Campbell they are trying to snap winless droughts. Campbell hasn’t won since 2007, Glover since 2011 and Watney since 2012. Watney’s first career victory came at Torrey Pines back in 2009.  One other tidbit, for the first time since 2007 Jimmy Walker doesn’t have his regular caddy Andy Sanders on the bag.  Sanders is at home with his wife, waiting for the birth of his son.  So for this week and next at Pebble Beach Watney has Jimmy Johnson on his bag.  Johnson normally works for Steve Stricker but with Stricker out for another couple of months because of his back surgery, Johnson became available.  Maybe Johnson has some kind of magic to help Walker on Sunday.

Has come close the last two years, had a great finish which kept him close. Think he is the best of the leaders and ready to win.

Hottest player right now, also playing pretty steadily. He will be hard to beat on Sunday

Think that his power, especially on the par 5s will be very important for him to win.

Has a great record when close, I can see him hanging around and backing into a win by playing well on the last three holes.

Past winner, question is if he has gotten his game back into shape.

Has been in this position before, he could easily throw a 68 at them and watch from the clubhouse.

Could be a struggle on Sunday:

Does have a sore hand and hasn’t been in this spot in a while. May be too many around him with a better shot.

Still hasn’t proved that he can play a great final round when needed.

Doesn’t have the experience to win on this course.

Same with him no experience and in a bad spot to gain it.

Started the plunge on Saturday, will continue on Sunday.

Is a low score possible?

Shot 68 on Saturday, if he could do two better could be a winner.

Still looking for his car that got towed, just too many things on his mind.