BlogThe weekend at the Masters

So what happened on Friday?

So we are at the halfway point and the talk of the first two days is the great play of Jordan Spieth.  He may of shot 66, two worst than his 64 on Thursday but on Friday he made no bogeys and about the only fault was maybe missing a six footer at 18 for birdie.  Still he is at 14 under, 130 which not only broke the 36 hole record but ties the 36 hole low total in majors, more on that in a bit.

Before we go on, should tell you some of the nuggets on Spieth’s first 36 holes:

So the big question, can Spieth do it?  He should but we said the same thing about Rory McIlroy in 2011.  That didn’t turn out very well.  But Spieth seems totally different, a better fit for the pressures and problems associated with leading the Masters.  It’s weird, normally you look at the stats to see why, of course his putting has been terrific but he is also hitting the ball well hitting 28 of 36 greens (only two others have it more).  The thing that I like is that he is playing smart golf, when he misses a fairway or a green his focus is to play safe in trying to just make par.  To think he has only made one bogey over 36 holes and that is on a par 5.

Can Charley Hoffman win?  I don’t think so, this is his 16th major and he only has made the cut in half of them.  His best finish was T27th at the Masters in 2011 and you just don’t see a guy with a poor record in the majors content on the back nine on Sunday.

Who should Spieth be the most worried about?  I would say Dustin Johnson.  Of course I didn’t like him coming into this event but he has proved me wrong as he is having one of his best Masters ever.  Johnson has eight birdies but can you believe he made three eagles today?  Johnson is the first to have three eagles in one round.  40 times the Masters has seen 2 eagles in a day, but never three.  Another record that Johnson has, he has played the par 5s today in 7 under which will be a new Masters record for most under on par 5s for a single day.  The previous best was 6 under by Claude Harmon in 2nd round, 1952; Steve Jones in final round, 1999 and Ernie Els in final round, 2004.  I feel that Johnson will be a force and start to nickel and dime on that lead.  He may be seven shots back but can see him backing up some of those shots on Saturday.

How about Justin Rose?  Another of those I didn’t like the beginning of the week, Rose didn’t play as well on Friday with a 70 but he is still in it.  Do I think he will contend, still think he won’t.  Just hasn’t been able to play a solid 72 holes and I see that trend continuing over the weekend.

Can Phil do it?  Damn right he can.  After a 70 on Thursday, he shot 68 with five birdies and one bogey.  He has hit 23 of 28 fairways and 25 of 36 greens but more importantly he seems to be doing better with the putter taking only 58 putts (8 more than Spieth) but he looks better with it than he has all year.  Still Phil is 8 shots back, but anything can happen and if Phil can post 67-67 who knows.

Anybody else has a chance?  Before we talk about those with a chance, here are those I don’t like.  Ernie Els surprised us all with a 67 on Thursday, but he shot 72 on Friday and I just don’t think he can do it.  I also don’t like Paul Casey, every time I looked up he was not doing well, still he has shot 69-68 and could be a force.

How about Rory and Tiger?  Tiger played better shooting a 69 and I think that he will be better.  But even with a pair of 66s I just don’t see him making up 12 shots.  As for Rory McIlroy he shot another 71 and just doesn’t seem right.  I think that he is coming back but it won’t be this week.

Those that have played well of late:

Of the top-18 on the leaderboard, who is playing the best: for the Masters

Of the top-18 on the leaderboard, who isn’t playing well: for the Masters

Saturday will be moving day at the Masters.  If Spieth can shot a 70, I think that he will have an 7 or 8 shot lead going into Sunday.  Can’t see him losing.  But if Spieth is shaky a lot of shots could get wasted and his five shot lead could get cut.  I like Dustin Johnson and Phil Mickelson making a move and possibly Tiger but he is too far back.  Like we have said before, Spieth controls his own destiny.  He shots 70-70 he wins.  The weather is going to be OK Saturday and terrific on Sunday so with the lack of wind Spieth could have a stroll in the park but honesty it’s rare to see a stroll in the park at Augusta on the weekend.

It gives you everything that you need to know about golf, you have all the players results and every tournament result, again in you pocket.  It’s very easy to use and you can take a good about of GOLFstats with you everyplace.  No need to get home and check things out on your computer at home, you can answer any question with your Ipad. 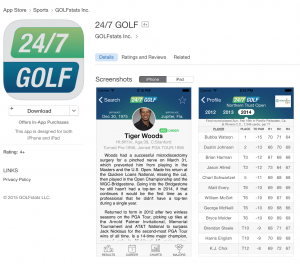 Who to watch for at the Masters this weekend:

Only one Best Bet:

He is playing so great and his destiny is in his hand. 70-70 and they put the green jacket on him on Sunday, I think it’s in his wheel house and he will do it. Forget about what happened to Rory McIlroy five years ago, Jordan is a totally different person and should be able to handle anything this weekend.

Who could give Jordan some problems:

If this guy can make three eagles in a single round, he could shot 67-67 to put some pressure on Jordan. But remember this, Johnson may be T-3rd but he is still seven shots back, that is a lot of shots to make up on.

Looking good and he has to be very cocky that his game is peaking at just the right time. So if he can go low and Jordan slips, Phil will be there.

Yes he is 11 back but you never know. Have to think that he needs 65-65 to have a chance, but he is playing better.

Just hasn’t shown that he can play a solid 72 holes. We will see on Saturday, if he shots 69 or better there is a chance for a big comeback for Rose.

Normally I would not bet on him in not only a regular tournament but a major. Seems that he is happy with a top-five or top-ten, so I think this is possible but not a win.

Has played well this year, his life is in a better place. Still needs some great play to be there at the end, I just don’t see him putting the pressure on Jordan

He surprised half the pressroom in making the cut, I can see his game getting better each day. Only problem, 12 shots is way too much ground to pick up over 36 holes but if anyone could prove me wrong it’s Tiger

Sorry, would love to see him win a Masters just don’t think it can happen.

Same thing, he is in a position that he has never experienced before and I just see him going low over the weekend.